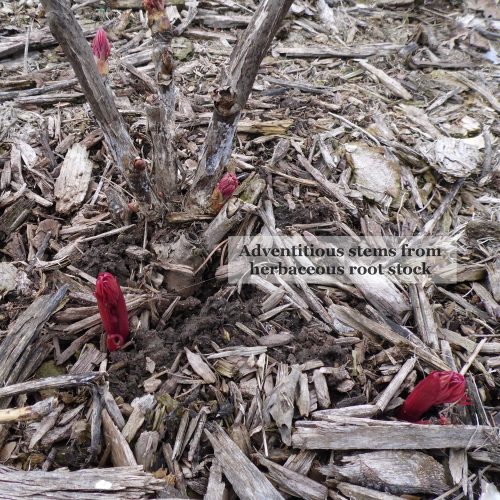 On the heels of this seminar, then, it seemed pertinent to discuss a particular phenomenon that has come to the fore of my attention over the last year or so regarding woody peonies and their relationship with the casual gardener. Somehow, the notion that woody peonies grafted onto herbaceous nurse roots are inferior to woody peonies that grow on their own roots or are divisions of a mother plant has begun to proliferate. This notion is indisputably false, however, before discussing peonies in any detail, it is first pertinent to examine the origins of this issue, that is, social media and the online public forum.

Facebook, and to a lesser degree other platforms like Instagram, have provided a forum for discussion amid an unimaginably wide spectrum of people on an equally diverse array of topics. People trade tips on chess strategy, storing baseball cards, fishing lure usage, DJ equipment, mayonnaise recipes… if you can imagine it (and often, even if it is unimaginable), a forum exists for it. Via the discourse in these forums, then, trends of opinion gradually emerge, such as what sort of eggs are best used in a particular mayonnaise recipe, and resultantly a touted opinion becomes an indisputable truth amid home mayonnaise chefs. One individual reads it and proclaims the advice to another in an effort to appear knowledgeable. They reap the benefits of a dopamine rush that comes with every “like” their comment receives, and suddenly the cycle of proliferation begins. Repeat ad nauseam and any opinion or half-truth becomes indubitable fact.

Twenty years ago we were forbidden from talking to “strangers on the internet” out of fear of being kidnapped or murdered – Now we seem to turn to these same strangers for advice on every aspect of our lives. A comment from Joe Smith in Tulsa Oklahoma is taken with the same weight as our primary care physician. Perhaps this is an exaggeration and the problem is not quite so serious, however, time and time again I have observed answers and comments from both novices and industry professionals taken with the same weight. This is a grave issue for not only peonies, but many other areas of our lives… but this is a digression. We are not here to illuminate the evils of social media, necessarily, and certainly not here to solve a runaway issue that may have no solution. On to peonies.

Through the processes thus outlined, grafted woody peonies are on the cusp of having a poor reputation. By some estimation, this is primarily due to a singular issue raised in the public forums – the Facebook peony groups – by novice gardeners: “Why is there an herbaceous peony growing up next to my tree peony, and what should I do about it?”.  The responses are as varied as the experience levels of the responders: “Cut it off at the ground”, “Plant it deeper”, “Leave it alone, now you have two peonies!”, and so on. The idea that this is somehow an issue inherent to grafted woody peonies has promulgated, many believing that herbaceous nurse roots will always sprout stems (particularly if “not planted deep enough”). Some respondents might even have the term “adventitious” is their vocabulary, making them sound quite reputable, and if one says it, ten more repeat never even bothering to look up the word.

What does this term mean, then? And why are so many grafted woody peonies sprouting herbaceous plants right next-door if the problem is not inherent to grafted plants? The issue is not a problem of the woody peony, nor necessarily always of the herbaceous nurse root. The term “adventitious” in a most basic sense means “out of place”, or a biological structure appearing in an abnormal or unusual location. Some herbaceous cultivars, though not all, carry genes that grant them the ability to sprout eyes and subsequently new stems from anywhere on their root tissue. If the individual grafting a woody peony onto herbaceous root stock is nondiscriminatory in their selection of said root stock, they may choose herbaceous cultivars that display this trait. The grafter may be unaware of this, or they may, unfortunately, not care if the gardener experiences issues with their plant in the years ahead. Another scenario where root stock may sprout eyes and stems results when the herbaceous cultivar is not necessarily adventitious, but the grafter was not careful in their preparation of the root stock and left some amount of crown tissue attached that would be capable of producing eyes at a later time.

Regrettably, these scenarios seem to be commonplace in areas of commerce where large volumes of plant material change hands. Big box stores that offer woody peonies in containers often import their nursery stock (particularly woody peonies) from overseas, or will purchase their stock from intermediaries that do. Several degrees removed from the customer, the grafters are never directly accountable for their product – and certainly so years later when a problem arises. They can afford to be non-discriminating in their root stock selection, and will be in the interest of churning out large volumes of a product to maximize profits. Where are most casual gardeners purchasing their plants? The question is a rhetorical one, but its answer with these facts in mind exposes the cause of a widespread problem that superficially appears to be the cause of grafting.

Casual gardeners do not recognize that the problem is not inherent to grafted woody peonies, but are merely the result of a poor-quality product purchased from a likely not-so-reputable source. They seek a remedy from other “more experienced” individuals who likely have a similar level of understanding of this situation and will provide answers rooted in half-truths. Bury it deeper? This can occasionally be a remedy to discourage adventitious roots from forming eyes, though some adventitious cultivars have been known to sprout eyes and grow from a foot or more below the soil. Cut it off at the ground? The roots will likely continue to form new eyes. Now you have two peonies? The worst option of all in that the herbaceous plant will likely take over, sapping energy from the grafted woody peony until it meets its demise. It comes down to the fact that, if properly grafted onto non-adventitious root stock, a grafted woody peony will thrive just as readily as a division growing on its own roots.

The only true remedy seems to be purchasing woody peonies from reputable sources. The growers who are directly responsible to their customers and back up their products with a guarantee. Growers of woody peonies in the United States seems to have taken a hit in recent years with the closure of Klehm’s Song Sparrow nursery, however, other growers still exist.  Many of these can be found listed on the American Peony Society website under Resources -> Peony Vendors. It is our job as enthusiasts and Society members to nip the spread of misinformation in the bud, so-to-speak. Our goal is to promote publicly the genus as best as we are able, and heading off notions that discourage gardeners from including these beautiful specimens in their gardens should be a top priority. Woody peony cultivars are just as worthy of attention as herbaceous, and are just as easy to grow (another unpopular opinion that needs dispelling… but another time!), and certainly the more readily available grafted plants – from reputable sources – are no less viable in the garden than own-root divisions of the same cultivars.