True lilies, a perennial that grows from a scaled bulb, belong to the diverse genus Lilium.  The genus is popular for cut flower production, gardening and decoration.   Plants produce a single stem from each bulb with leaves found along them.   Generally they are of easy culture and most available cultivars are hardy for Wisconsin gardeners.

Flower size, color and shape are wide ranging depending on the group and the extent to which the group has been hybridized.  Many new hybrid introductions reach the market on a yearly basis with new and unusual developments becoming routine. 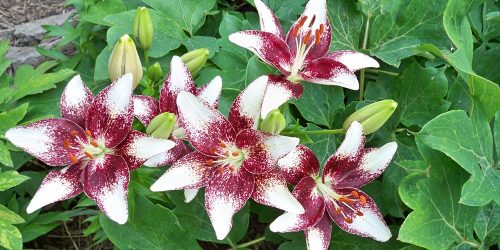 Most are summer blooming, but groups within the genus bloom at different times during the period.  Martagons, valued for their numerous small flowers and fragrance are first to bloom (end of June in Wisconsin).  These are followed by the highly variable group ‘Asiatics’, which typically have no fragrance (late June to mid July.  Later many of the hybrid lilies begin to bloom, most notably the ‘LA’ group, a cross of the Easter lily with an Asiatic lily (Mid July).  Toward the end of the season OT, or orienpets, a cross of Oriental and Trumpet, display their large fragrant blooms (late July to mid August).  The last major group to bloom is that of the fragrant Orientals.   Growing a different cultivars from each group can allow the gardener to enjoy this wonderful plant throughout much of the growing season.

Late spring frosts may also be problematic for gardeners that grow lilies.  Freezing temperatures may damage plants early and cause foliage and stems to become susceptible to fungal diseases, resulting in early dormancy and loss of seasonal growth.  The bulbs will generally survive to come up the following season, producing somewhat weaker plants for the year. 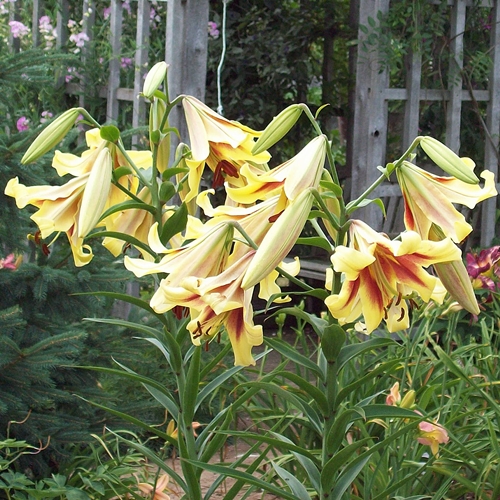 Animals like chipmunks, squirrels, mice, rabbits and deer find lilies to be one of the tastiest plants in the garden and often feed on the plants as they arise from the soil in spring.  Many gardeners that grow these plants protect their prized lilies with wire enclosures for protection.  Our advice is be prepared to protect lilies in your garden, as most animals have a difficult time passing them up!Frost and animal damage can be quite disappointing, but most seasoned gardeners are willing to accept these risks due to the beauty of the flowers.  Gardeners who prefer a more consistent bloom from year to year may want to consider daylilies, but we think Lilium are worth the little extra effort and patience.