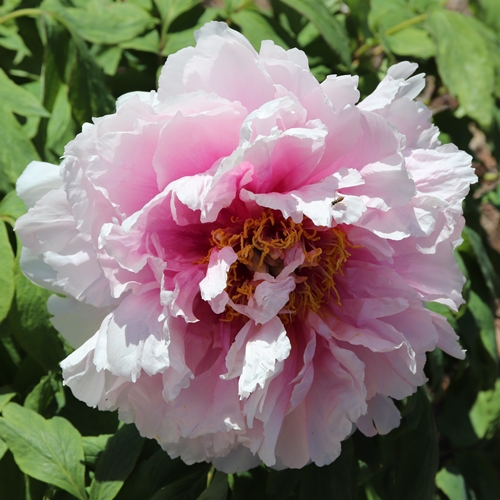 Paeonia suffruticosa has a long and interesting history, beginning in China, later in Japan and then Europe and the United States.  As much as I enjoy the P. suffruticosa complex’s history, it is long and can best be explained in a variety of other literary pieces and publications.  With that said, there are a tremendous number of other interesting pieces of information involving this group that may be of interest to American and European gardeners.  This group of woodies is perhaps the most widely grown and popular of all, but not all are suitable for our gardens.

Oddly, Paeonia suffruticosa is actually not a species, even though it was long considered to be one.  The plants in this group are best described as a ‘manmade species’ and are not to be found in nature!   Genetic marker studies have shown that the species: P. cathayana, P. rockii, P. qiui, P. ostii and P. jishanensis are ancestral contributors to Paeonia suffruticosa.  Paeonia suffruticosa is known as ‘King of Flowers’ in China,  which likely involved the crossing of the various species listed above early on in the development of this group.

In China, P. suffruticosa is grown in fields by the millions and is the center of many festivals during the bloom season.  Many plants are exported throughout the world for the enjoyment of the often large double flowers they produce.  The flowers often nod and are carried low on the plant.  While this characteristic is not generally appreciated by the American public, it was a selected trait in China.  Unfortunately, the Chinese suffruticosas are narrowly adapted to the rather semi-arid climate in which they are grown in China.   Many a good gardener has struggled with growing woodies originating in China due to their demanding requirements. At one time the Chinese suffruticosas were the most common woody peony on the market and least expensive, which put them at the finger-tips of many unwitting gardeners.  The failure to grow these plants may be a major reason that woodies are viewed as more challenging to grow than herbaceous peonies.  The Chinese cultivars are outstanding plants, but must be grown in the conditions that best suit them.  Semi-arid conditions, relatively low humidity and stable climate conditions appear to be necessity for this group of P. suffruticosa.  A stable spring warm up without frosts, a marked dry period that occurs on schedule and predictable seasons of rainfall are all part of the Chinese P. suffruticosa’s requirements.

Approximately 800 years ago plants of P. suffruticosa were transported to Japan, where they were further hybridized in a cooler and wetter climate.  The subsequent progeny of crosses were selected for upright flower carriage, the ability to remain healthy in a more rigorous climate and clear petal color.   Paeonia suffruticosa flowers developed in Japanese hybridizing programs are generally less double and do not have the petal weight of Chinese cultivars, which allows them to stand up in a more erect position.  Plants also have greater cold hardiness and better water tolerance.  It should be noted that one of the greatest negatives of Paeonia suffruticosa is susceptibility to fungal infections (botrytis) due to wet conditions at various times of the year.  The Japanese cultivars are generally good candidates for American and European gardens, but some cultivars and conditions will cause more challenges.

American and European cultivars are often the best choice for gardeners wanting to grow this group, as they were selected in the climate they are to be grown.  A blanket statement that “all are good choices for gardeners in continental climates” cannot be made with assurance, but plants will, in all likelihood, be easier to grow and bloom than those of Chinese origin.

Japanese, American and European cultivars can usually be grown in USDA growing zones 4-8, but must have well drained soil at all times.  High humidity or locations that experience high precipitation will often have greater difficulty with disease in their P. suffruticosa plants.  Experimentation with various cultivars will be necessary to determine which will grow best for you in your area.

Most P. suffruticosa cultivars are propagated through grafting scion wood (woody stem with buds) to a herbaceous root.  The herbaceous root is called a ‘nurse root’ and it should serve only to sustain the plant until it can grow its own roots.  This bit of information is important in planting, as enough of the woody stem must be situated below ground in order for the plant to grow its own roots.  Grafts that are planted shallow will often not have the opportunity to grow their own roots and will decline over time, thus the nurse root should be buried no less than 4 inches below the surface (6 to 8 inches is better).  Many producers of grafted plants use herbaceous root stock that is adventitious, that is roots that will form their own eyes and begin to grow, which compete with the woody peony joined to the same root.  Unfortunately, lower quality grafts that are the most widely available, often have adventitious nurse roots.  Here again, the unknowing consumer may experience poor results growing P. suffruticosa, causing the group to be looked up negatively.  Most specialty nurseries avoid the use of adventitious roo tstock and better results can be expected.  Unscrupulous vendors attempting to entice prospective buyers often prey upon consumers with outlandish claims.  Please consider the following:

1)  There are no true yellow or orange P. suffruticosas.  Anything marketed as such is likely an intersectional or lutea hybrid woody peony.   Blue peonies do not exist, only in our dreams.  All P. suffruticosa cultivars are variations of pink, white, cream, red and lavender.

2)  Seeds can be purchased and they are generally easy to grow, but will not come true to what the parent is.  Seed from a red parent will likely produce red, pink, white or lavender flowers.  P. suffruticosa has a highly variable genetic making up, making prediction of flower color of seed grown plants unlikely.  Thus buying seed by color is only a sales gimmick.

3)  Many P. suffruticosa plants are sold by color.  Suppliers of these plants are not particularly careful and the purchaser can expect to get something completely different than what was anticipated.  However, they are often quite beautiful and can be wonderful garden plants.  Plants sold by color may actually be named cultivars, but could easily be seed grown (unnamed).  We prefer to purchase named cultivars, so we know what we are getting.

4)  Plants in which the identity has been lost or not disclosed are extremely difficult to later identify as there are literally thousands of different P. suffruticosa cultivars, many of which have only minor differences.

5)  Expect newly planted subjects to take 2 to 3 years to settle in before they begin to perform to their specifications.  Once established, well cared for plants can easily remain productive for 50 or more years.

6) Dead or weak stems will need to be trimmed away from time to time after leafing out in the spring season,.  Plants that become spindly with little foliage on their stems may be trimmed to the ground in early autumn and will produce fresh basal growth the following spring.  Note:  Very old single stem plants should not be cut completely to ground level as they often struggle to initiate new growth from old dormant buds, cutting these ‘old growth’ peonies halfway to the ground is often a better choice.

7) If you purchase a cultivar that does not perform well, don’t be afraid to try another, as they do not all perform the same way.  While they may seem expensive, consider the amount of money we spend on purchasing annuals each year-a good woody peony will last much longer and in my opinion is a greater value.

We grow many P. suffruticosa cultivars and the following are some examples.  Please note that some of the following selections are more challenging than others.

‘Shima Nishiki’.  Japanese origin.  Medium to large semi-double flowers may be red, white, pink or streaked all on the same plant.  Plants often go through cycles in which they produce solid colored flowers for a number of years and then produce streaked flowers.  It is a stunning plant, but is often plagued by botrytis.  To 4 feet in Wisconsin.

‘Schichi-fukujin’.  Japanese origin.  Very large pink semi-double flowers with a frosted appearance on the outer edges of the petals.  Plants are taller and vase shaped, often with a large central stem.  Plants are of easy culture and relatively disease resistant.  To 5 feet in Wisconsin.

‘Shimatsubeni’.  Japanese origin.  Huge red double flowers which are heavily ruffled.  Plants often suffer dieback from winter conditions here in Wisconsin, but are reliable bloomers once established.  May suffer a bit more from disease than the average Japanese suffruticosa.  To 3 feet in Wisconsin.

‘Kamata-fuji’.  Japanese origin.  Huge lavender double flowers which are heavily ruffled.  One of the most beautiful suffruticosa and of easy culture.  A bit of searching will be required to find this plant as it is not easily propagated.  To 3 ½ feet in Wisconsin.

‘Princess Chiffon’.  American origin.  Domoto/Klehm.  Large medium pink semi-double flowers.  A heavy blooming plant that is worth growing and is of relatively easy culture.  We seldom see disease on this plant and is widely popular woody peony growers.  To 4 feet in Wisconsin.

‘Shimane Chojuraku’.  Japanese origin.  Large lavender single to semi-double flowers that have dark maroon basal flares.  Plants are highly productive annually and produce large woody stems over time.  It may grow to 5 or more feet in Wisconsin.  Late frosts can stop bud growth on this cultivar, leaving green buds that are dead inside.

‘Toichi Ruby’.  American Origin.  Domoto/Klehm.  Large light ruby red blooms of semi-double form.  A very unusual color and quite stunning.  Stem life tends to be relative short on this cultivar, but it regrows from basal shoots readily.  To 3 ½ feet in Wisconsin.

For further cultivar information I recommend using the American Peony Society’s Cultivar database.   Searching with the key word “suffruticosa” will bring up hundreds to peruse.  It should be mentioned that P. rockii cultivars crossed with P. suffruticosa will also be revealed in the search.  Most Chinese suffruticosas are not found within the database due to limited information and lack of use of the registry by Chinese growers.  P. suffruticosa cultivars easily cross with P. rockii cultivars, which contain characteristics of both.